Hello, I'm Jess and the purpose of this blog is to maintain my sanity as I try to make roots in my new home in St. John's, NL! I do love myself a blog, but sometime in the last few years I've stopped writing this way despite blogging being probably the cheapest and most effective therapy I've ever had. So I am looking forward to creating meaning where it feels like more should be.

This time I actually feel like I'm talking to people because this cool and knowledgeable guy I met at the CPR course sent me a blogroll of NL bloggers which I'm finding quite sweet. Something I really like about NL is the people just seem... unpretentious or something. I'll write more about that later but it is my baseless observation so far. Also I figure in this new age the blogosphere is a pretty good way to meet people.

Backstory: We moved from B.C. for no special reason other than being newly married and wanting to start our new lives somewhere as different as possible (we were kind of screwed out of a honeymoon due to a certain pandemic you might have noticed). We'd decided on Whitehorse because we could transfer hotels with the chain we worked at, and even get staff accommodation, but then the hotel shut down and it was literally impossible to find other housing up there. So we let go of that option, which was a bummer because the climate is one of the biggest changes I'd hoped for (I'm so gonna eat those words in 20 years) but then I remember seeing pictures of Snowpocalypse on Reddit from last year, and was like, Newfoundland? What even is Newfoundland? It's PERFECT, is what it is. We found our jellybean house immediately and even though I couldn't make out most of what my landlord was saying on the phone, we'd signed the lease the next day and now it is our jellybean home.

So then off we were, tetrising everything we owned into our van, determined to travel as responsibly as possible in the middle of a pandemic while still not rushing this once-in-a-lifetime adventure (I had done the trip as far as Toronto by motorcycle 5 years prior back when I was insane). By that time we were only about 500 a day nationally and mask mandates in establishments were just starting to creep in. We got our letter of exemption from the government, slept most nights in the van, and always wore our masks when no one else was (the prairies). I was most looking forward to taking our time around the Maritimes but a logistical error that we had no way of knowing until we got to the NB checkpoint had us driving straight through the night to make the ferry from Sydney, so, another time!

So we've been here for nearly two months with all affairs in order except the ones that make it feel like we have a life, like a job and friends. We have been quite fulfilled at home by this perfect cat we lucked out into adopting (and our perfect marriage lol) but that just makes us want to get out of the house even less. Are we a bit depressed? Yes. Is it cuz we don't really know how to manage our freedom? Yes. Are we all in the same boat? Yes. Are we really though? Well, no, we are in a non-sinking boat ty Canadian government. Do I feel guilty for having this feeling? Yes. Does that guilt make me feel worse? Also yes.

Here's to being held accountable for my own happiness via blogging! 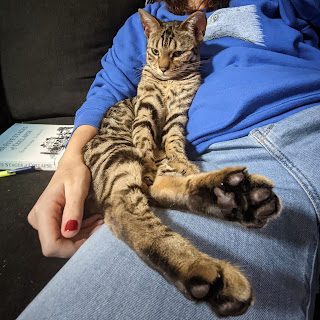 Hello, I'm Jess and the purpose of this blog is to maintain my sanity as I try to make roots in my new home in St. John's, NL! I do ...